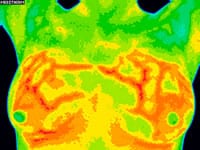 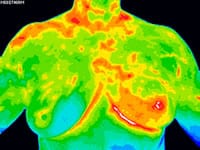 DITI aids in the early detection of breast cancer and other breast disorders by monitoring abnormal physiology. Worrisome physiologic changes are often detectable years before a tumor becomes visible on a mammogram. In about 70% of cases, thermal changes are the first sign of a developing cancer. The abnormal physiologic changes are not specific to cancer but are a marker of increased risk. A persistently positive thermogram is a far more accurate assessment of your breast cancer risk than family history.

All women can benefit from DITI breast screening. It is especially helpful in women between the ages of 30 and 50, whose denser breast tissue limits the effectiveness of mammography. The sensitivity of mammography alone in women with dense breast tissue is as low as 31%.1Thermography is also beneficial for women of all ages who, for any reason, are unable or unwilling to undergo routine mammography.

Because every woman’s breasts have a unique thermal pattern, it is important to establish a stable baseline before proceeding to routine annual screening. This is done by obtaining an initial thermogram, followed by another study three months later. If there is no interval change between the two studies, then your baseline has been established. In other words, we know what is normal for you. These baseline studies are then archived for annual comparison. Any change from this baseline is suggestive of developing pathology.

But which one is better–a mammogram or a thermogram? That’s what everyone wants to know. It’s a perfectly logical question, but it’s the wrong question. Both tests can produce images of the breasts, and both offer the possibility of early breast cancer detection. But other than that, they have nothing in common. They are different tests, produced in different ways, showing completely different things.

Thermography can detect physiologic changes associated with a cancer while it is still at a cellular level—before it becomes visible on a mammogram. Thermography has other unique abilities as well. It can indicate estrogen dominance, an imbalance in estrogen levels associated with higher breast cancer risk. It can detect lymphatic congestion, also a precursor to disease. The effects of diet are also clearly seen. Women on a typical Western diet who switch to a healthier, plant-based diet show remarkable improvement in their thermal patterns. In short, thermography is a way to monitor breast health, not just a way to detect breast disease.

Thermography does not replace mammography. It is FDA approved as an adjunct to mammography. It adds a much needed piece to the early detection puzzle, providing risk information and possible early warning that mammography cannot.